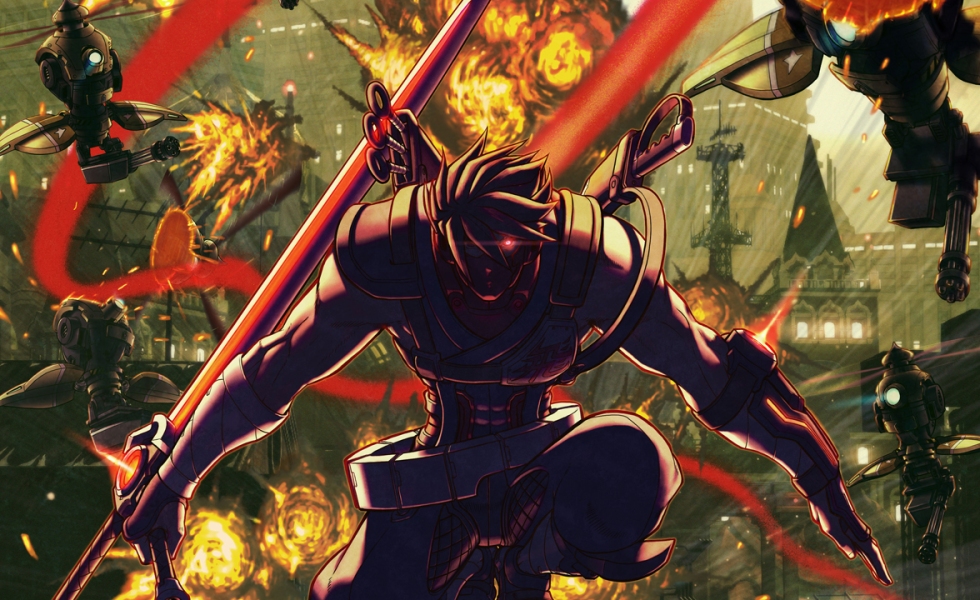 Strider is the latest release from Amazon acquired developer Double Helix Games, and an attempt to revitalise one of Capcom’s most unloved heroes.

For the duration of this hack and slash adventure you play the role of Hiryu Strider – a futuristic, sword-wielding techno assassin – as he hacks and slashes his way through hordes of Russian robots. As far as story goes, that’s about as deep as it gets; there are no Metal Gear Solid style cinematic cut scenes, no Mass Effect inspired dialog trees, and no game changing choices, you’re simply presented a hero, a villain, and then thrown straight into the action without any unnecessary dialogue.

Strider follows a tried and tested formula that harkens back to the NES days of 2D Metroid and Castlevania. You’re left to your own devices to navigate a sprawling world, defeat bosses and acquire upgrades that unlock previously inaccessible areas (sound familiar?). The game’s controls feel tight, with Hiryu’s sword swipes feeling fast and satisfying, while his signature cart-wheels and slick maneuverability allow for some rapid acrobatic destruction that gives you a great sense of power while throwing enough enemies at you to maintain the challenge of the game.

Stylistically, the game looks good without ever being beautiful. The colourful 3D character models pop against the backdrop of blue and grey, but the areas just aren’t varied enough to ever make them particularly interesting, and screen after screen of cold futurism quickly grows tiresome. One or two infuriatingly cheap boss battles may also sour the experience, but that’s also kind of the point. The elation you feel that one time you’re victorious is enough to offset the frustration of countless deaths leading up to it. Much like Capcom’s iconic Mega Man series, you’re encouraged to hone your skills and memorise enemy attack patterns in order to progress.

Strider is a game that combines old school mechanics with modern aesthetics, which ultimately makes for a fun experience. It’s not revolutionary by any stretch of the imagination, and it has its fair share of flaws, but if you’re looking for a challenging 2D side-scroller to tide you over until Shovel Knight or Mighty No. 9, then you can’t go far wrong with Hiryu’s latest adventure… Especially considering it’s free via PlayStation Plus throughout July.